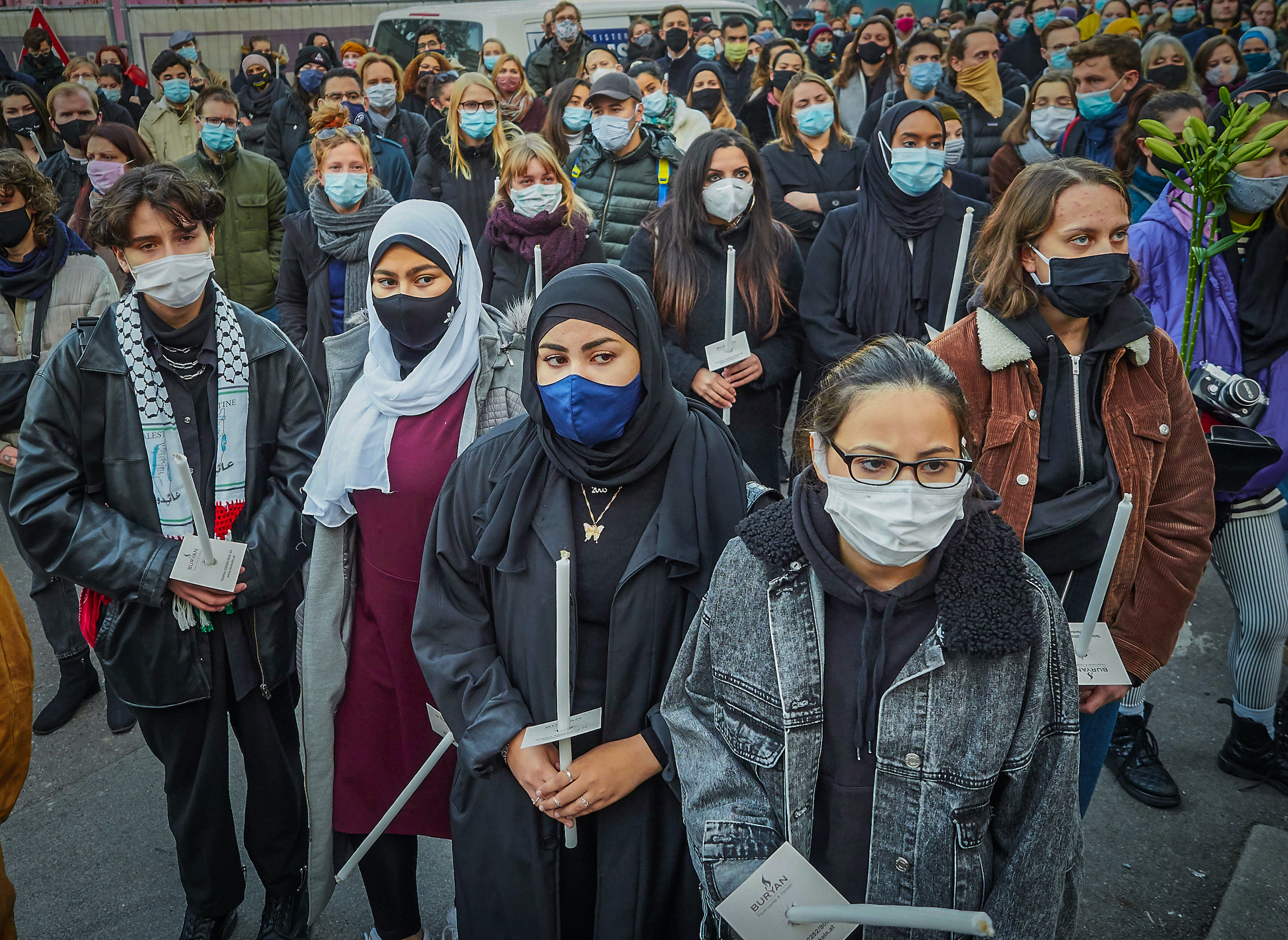 This article by Samee Alhwash was originally published on The Battleground and is republished on Global Voices as part of a content-sharing agreement.

Whether in the boycott-French-products campaign on social media or through conversations with friends, Muslims I know feel conflicted about the recent terrorist attacks in Vienna and Nice.

While they condemn violence, there is also a sense that it is to be expected. Their conflict gets expressed like this:

“We don’t condone killing, and those who kill have nothing to do with Islam. But when provocation is disguised as free speech, (for example, Charlie Hebdo), a reaction should be expected.”

“Why is it that it’s only attacks by Muslims which are branded “terrorist?” Why is French secularism, ‘Laïcité’, applied only to Muslims? Why is it illegal to question the Holocaust but okay to criticize the most sacred elements in Islam?”

Of course, some clear Muslim voices do denounce this confusion between secularism, free speech, and civil liberties. But this conflict is widespread. It seems to come from feelings of disenfranchisement framed in the language of contemporary political Islam.

Where does this rationalization of violence come from?  Is it really something innate to Islam, dooming the religion to be incompatible with key components of democracy, particularly freedom of speech and secularism?

These are important questions as terrorist attacks produce trauma that brings out equally reactionary arguments within European societies, raising questions about cultural diversity, integration, and assimilation.

Anything sounding like an apology for terrorism risks handing political victories to far-right groups, wrongly stereotyping Islam as backward and violent.

We have been here before. In 2005 I watched something that seemed beyond imagination on TV in my small living room in Syria: mass protests across the Middle East and North Africa (MENA) against offensive depictions of Prophet Muhammad by the Danish newspaper Jyllands-Posten.

The protests were tolerated by oppressive regimes that would otherwise crack down on any form of protest. The demonstrations were the only ones of their kind until the Arab Spring in 2010.

Thinking about them now, I cannot help but question why other incidents didn’t spark the same outcry from Muslims.

The killing of Rohingya Muslims was condemned but it didn’t produce the same public outrage. Nor have the Uyghur camps in China.

There was even a widely circulated YouTube video in 2012, one of many to come, of Syrian government thugs forcing an anti-government demonstrator at gunpoint to kneel on a portrait of Bashar Al Assad, in the place of a sajjāda (Muslim prayer rug).

One thug shouted at him, “Pray to your god, Bashar!” True, the actions of the Syrian regime attracted jihadists from all over the world. But this didn’t spark public protests at Syrian embassies like the Danish cartoons did.

This duplicity was intriguing. It tells us something about the nationalistic nature of political Islam today.

It’s not a matter of incompatibility between Islam and free speech. Rather, Islam has become an insecure identity that is always undermined by criticism from the Christian or godless, but always colonial, West.

Muslims adhering to moderate schools of thought, and non-practising Muslims, share this sentiment with conservative elements within Islam. Even secular nationalists view Western criticisms of Islam as an attack on their own culture.

Whether they are Muslim or nationalist, most people in MENA countries are poor, uneducated, and have no political representation. Prolonged stagnation makes them more susceptible to destructive narratives that fuel identity politics and exacerbate social issues. The success of Europe is not viewed as a result of humanist philosophy and a bloody fight against nationalism, such as WWII. To many Muslims, secularism is just a Western colonial scheme to strip away Islamic identity and culture.

Many people in the Middle East and North Africa only see Christian imperial Europe and become slaves to their own inherited colonial traumas. Demagogues, kings, and dictators across the Islamic world reinforce this narrative to legitimize their existence. This feeds into a divisive, nationalistic identity politics that negates any positive intercultural relations with Europe.

The problem gets even more complex inside Europe, as immigrant communities find themselves in an alien and often racist environment. They cope by embracing shallow and dogmatic versions of political Islam.

Colonialism exacerbated social problems that Muslim societies already had. It didn’t create them. We were unequal, hierarchical, and sectarian even before European colonisation and the Ottoman Empire. European colonialism simply reinforced existing hierarchical political structures and used sectarianism to divide and rule. The dictatorships we suffer under today are a continuation of those structures. That means it’s up to us to lead an intellectual revolution that blocks demagogues from using our worst instincts against ourselves. That involves being self-critical about everything, including fundamental reform of our identity and religion.

I’m not saying communities who suffered under colonialism should just forget about the past and move on. On the contrary, we need to see the legacy of colonialism as a big part of the problem, but not the only one. Colonialism inflicted profound scars on the psychology and politics of MENA cultures, which were not healed The racism that immigrants from the Middle East and North Africa experience only reinforces that.

This is why the legitimate sense of being victimised by colonialism must not be applied to every social ailment.

On the other hand, because of the history of colonialism, Europe has the responsibility to create a politically correct public discourse, respectful of Muslims, aimed at facilitating their integration, as equals. This must coincide with supportive initiatives abroad, in international development and security policy. And in turn, it’s the responsibility of Muslim communities to understand that there is no alternative to reform in today’s political Islamic discourse.

Moderate voices within Islam have to make it clear that nothing is sacred in a democracy, and that we must reject political violence without fail.

To initiate this reform, Muslim communities need to look nowhere else but their own history for messages of tolerance, reason, and most importantly shared values with Europe.

There have been many scholars, philosophers, and even military leaders in our history who testify to the rich potential of Islamic culture, and its tolerance of free speech.

One example is the medieval Arab philosopher and poet Al-Ma’arri. In one of his roughly translated poems, he writes “There’s a commotion in Latakia between Ahmed and Issa. One rings the bell and the other shouts from a minaret. Each glorifies their religion. Oh my poetry, who is right?”

In Risalat al-Gufran, Al-Ma’arri adds, “There is but one Imam, the mind,” and “Two inhabit the earth: one with brains but no religion and another with religion but no brains.”

This is a philosopher who lived during the Abbasid Caliphate over 1,000 years ago. He was neither beheaded nor prosecuted. On the contrary, he was praised as one of the great Arabic philosophers and poets.

A statue commemorating Al-Ma’arri stood in his hometown in Syria till 2013, only to be destroyed by Al Nusra Front, an offshoot of Al-Qaeda.

On the issue of incompatibility with secularism, the development of the Muʿtazila school of thought brings out similarities with renaissance humanism from which secular humanism emerged.

The Muʿtazila movement came into being following the translation and interpretation of Aristotelian metaphysics and neo-Platonism. It rejected the idea that the Quran is “uncreated,” which dominated mainstream Sunni and Shia doctrines, arguing that the world can be explained through rational thought alongside scripture. It’s not quite secularism as we understand it today, as it doesn’t separate state and religion. But it opens the door for critical and scientific thought, potentially paving the way for secularism.

Secularism needs reform as well, as it was often used to discriminate against minorities, whose religiosity is far different from the faith it was supposed to restrain.

This article is: Creative Commons — Attribution 3.0 Unported — CC BY 3.0 globalvoices.org

‘Nothing is braver than a trans woman unafraid to die in...

We are Anonymous. We are Legion.